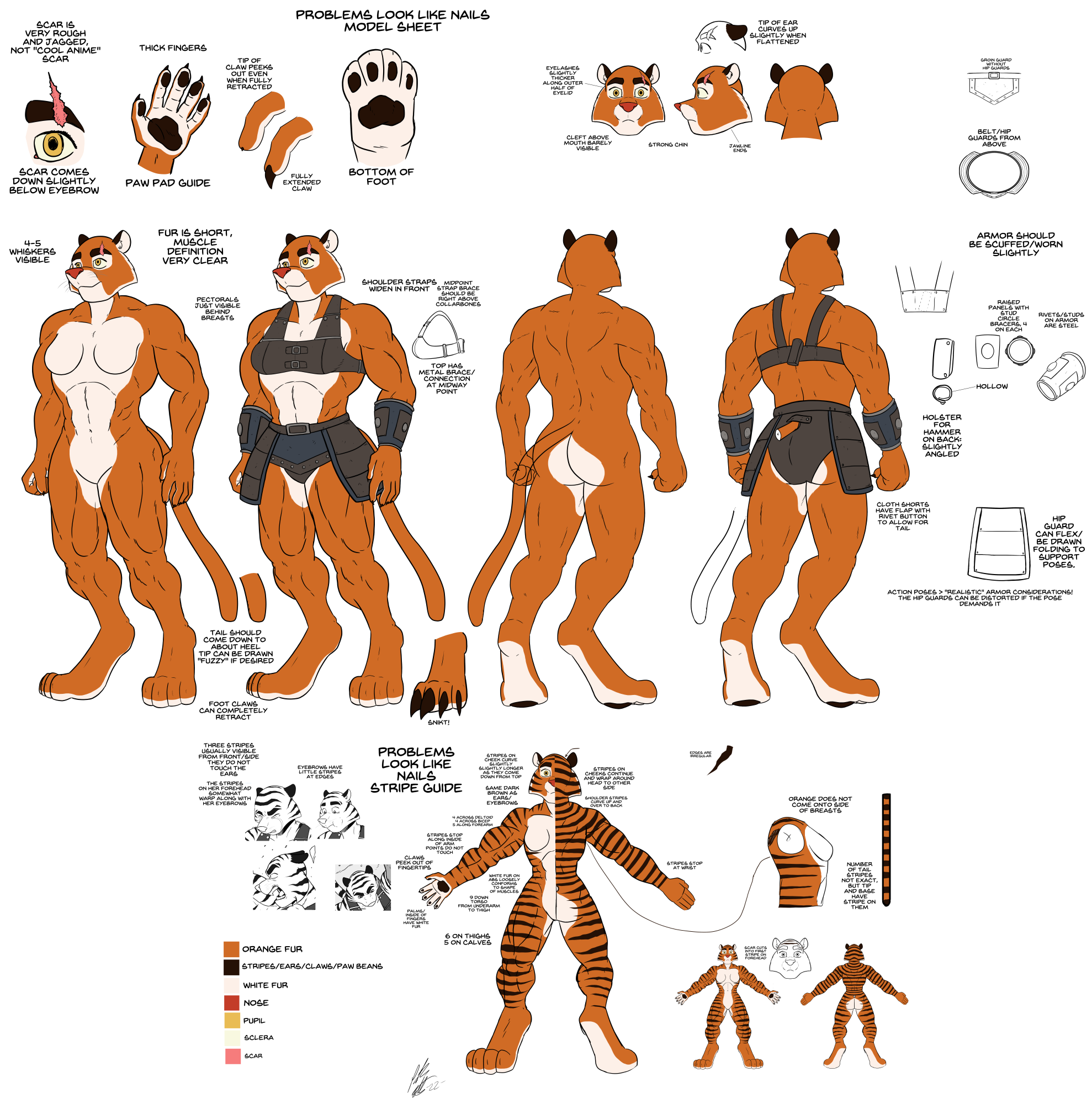 General description: Impulsive, headstrong, but not without a certain amount of charm. Nails will often charge headfirst into a situation before fully grasping it, which can sometimes land her in trouble. Generally cheerful and willing to help others, she has a strong sense of justice and has little pity for anyone who preys on those weaker than them. Nails rejected both the theocratic caste system of her homeland, and her arranged marriage, instead deciding to strike out on her own to satisfy her own innate curiosity (at least that's what she tells those who ask, her real reasons for leaving home are more...controversial). Her upbringing was fairly strict, including religiously, and though she's not super orthodox she does believe in Tabax the Cat Lord and will offer prayers to them semi-regularly. Her impulsive nature, coupled with her eagerness to leap to the aid of others, can sometimes get her into situations over her head. She's also generally repulsed by regular-sized insects, especially flying ones ("You can walk away from crawling ones, the flying ones can chase you" being her reasoning) which is ironic because she'll throw herself into combat with giant insects without a second thought ("They're easier to squish!")

Backstory: Having grown up in a life of privilege, Nails was tutored in combat by her family from an early age as a method to try and control her anger issues, hoping that the dicipline of combat training would give her a more controlled outlet. It worked to a degree, but where Nails truly found an outlet was in physical training, taking every available opportunity to condition her body and channeling her internal fire outward. By the time she was out of her teens, she'd reached what she considers almost peak physical shape. However, she knew that she didn't like the idea of the arranged marriage she was bound to, being an outspoken lesbian. After an incident with her girlfriend, she found herself with little choice but to leave home. So she left a note for her parents, took a meager inheritance to survive on, her grandfather's warhammer, and set out on her own (much to the secret relief of her betrothed, as she intimidated him greatly). 6 years later, her inheritance has dwindled to almost nothing, leaving her with little more than the armor on her back, her hammer and a small crossbow for hunting and combat. So she travels, both to keep ahead of the bounty hunters the her parents send after her, as well as to satisfy her innate Tabaxi curiosity. Currently she helps her friend Ravani (a Kobold) in his monster-hunting business.