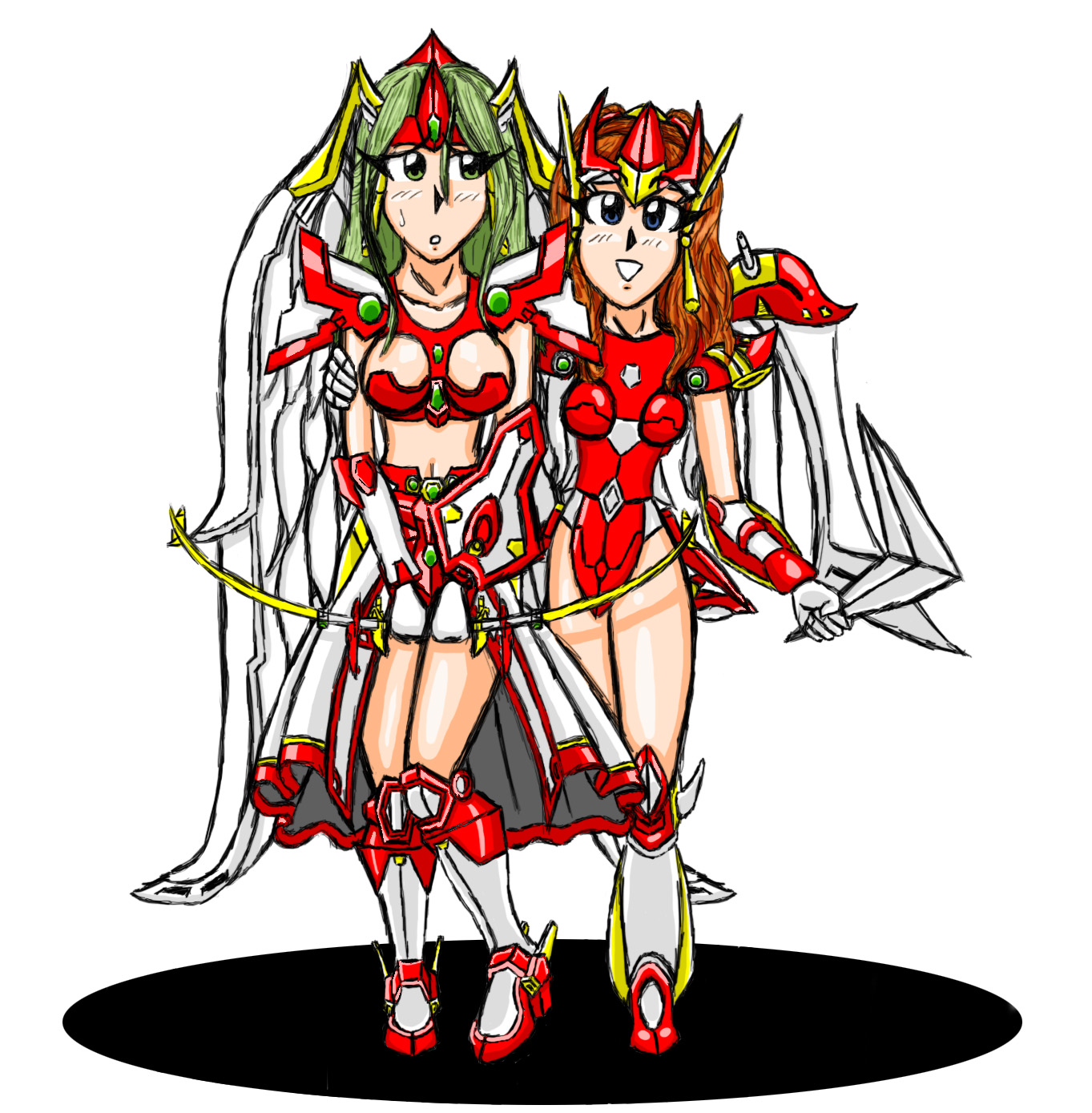 Man... I killed myself last night trying to get this in on time for Supa Robo Clubs's inagural contest... I got less than 5 hours sleep trying to rush it out... So... Yeah, I don't think I did as good a job on coloring it like I did with Latooni and Shine... That's the only thing I hate about contests... The last second crunch... Remember how I put all that work into Mimsy last year and in the end, I couldn't finish it in time...? -_-;;; Well, at least THIS is done. Now, to EXPLAIN it.

Here we have Lamia Loveless and Manami Hammill in the MS Girl mode as the Angelg and Suimarg Splendid. The idea of the contest was to dress up your favorite Super Robot characters as their machines and I had already been thinking about this picture so when the contest was announced, I already knew what I wanted to draw.

Now, I know everyone probably knows Lamia already but I'm sure some of you, especially those of you who rarily play an SRW that's NOT on Playstation probably wouldn't know Manami and are probably questioning why her costume resembles Lamia's. And really. There's a really good reason why I paired them up here.

It is After Colony 195. The One Year War has come and gone and in its aftermath, the Earth Federation exhausted its resources leaving it largely vulnerable. From the depths of space, came the Muge-Zorbados Empire and quickly crushed all Earth opposition. Now, as the rebel group March Wind (read: Londo Bell) prepares to challenge the Empire, a young girl from a noble house and a member of the Romefeller Foundation that has been feeding the rebels information finally gets her wish to join the battle with her own inheretence... Her uncle's uncompleted Super Robot... The Suimarg!

And that's Manami's basic story. She's one of the four Banpresto Originals that you can play as in Super Robot Wars 64, specifically, Super Robot Female. Her Rival is her own cousin, Aisha Ridgemond, who sided with Oz and the Empire. She pilots the mechanical bird, Elbulls, which is eventually found out to be a missing component of Suimarg. In traditional SRW fashion, you cross swords with Aisha several times, each giving you a chance to try and convince her. If you do, she'll eventually join up. If you don't, she'll die. Either way, Elbulls is grafted onto Suimarg and the entire unit is upgraded as a whole. The end result being the Suimarg Splendid. Which features more and stronger weapons than the original.

As for the relationship between Suimarg and Angelg... Recall that Angelg's full designation is SMSC Angelg. SuiMarg Splendid Custom. While it's never directly mentioned, it's widely assumed that Shadow Mirror came from SRW64's world as they brought with them several pieces of hardware native to that world. Examples include the Assualt Dragoon series, the Rath and Landgriths, and Gain series. Of course, what's interesting is that while the Griths and Dragoons were commercially available PTs in SRW64, the Earthgain and Suimarg were unique units (being Super Robots and all) and how Shadow Mirror came into the posession or position to build customized/improved versions of them is a mystery.

Another mystery is that Earthgain's pilot, Brad Skywind, bears a strange resemblence to Axel Almer... But... That's neither here nor there....

Suimarg and Angelg do indeed look quite similar, but their abilities are quite different. Angelg's attacks are all based on its sword and bow techniques. Suimarg is more Super Robot-ish in that most of its attacks come from different parts of its body. It's armed with wing mounted Beam Cannons, missles, a breast firing ripple beam whose name makes no sense in Romaji (asshaakuru?), an "angelic" Ultimate Beam, and it's strongest attack, Bloody Howling (with Dynamic Killing ACTION! XD). And in terms of hanheld weapons, the Lightning Sword (and later Double Lightning Sword) summons lightning and slashs once full of electrocuiting power and is also used in the Bloody Howling attack. The double swords, also allow Suimarg a friendly unit friendly MAP attack called Spiral Sword. It also carries the Destruction Boomerang (shown in picture) which eventually becomes Doubled after Suimarg becomes Splendid.

Anyway... That's the scoop. And as you can see, Manami's a fiery, spunky girl who would certainly be at odds with the solemn Lamia. They'd make a GREAT pair! XD

What kind of comments is migucast seeking for this piece?